This article is is devoted to Saudi Arabia’s history as a Wahhabist Islamic state.

SA is one of the largest oil export nations and the US is the largest oil consumer.  The alliance has weathered Middle Eastern Wars, is the foundation for  the petrodollar system, and brings together the two countries that their supporters often claim makes these countries exceptional in their own ways: SA enjoys a special status as the protector of Islam via its custodianship of the Islamic holy sites in Mecca and Medina; the United States is frequently deemed to be the global champion of democracy and freedom in the world because it has a unique ideology and mission which makes the US a superior nation.

Events in Syria and Iraq have highlighted the importance of the alliance and the tensions inherent to the claims made for such very different states:

. . . the alliance persists, kept afloat on a sea of Saudi money and a recognition of mutual self-interest. In addition to Saudi Arabia’s vast oil reserves and role as the spiritual anchor of the Sunni Muslim world, the long intelligence relationship helps explain why the United States has been reluctant to openly criticize Saudi Arabia for its human rights abuses, its treatment of women and its support for the extreme strain of Islam, Wahhabism, that has inspired many of the very terrorist groups the United States is fighting.

Ibn Abd al-Wahhab was born  c.1702 to a religious family in the town of Al-Uyaynah in the Najd region of the Arabian peninsula. 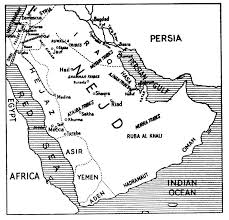 At an early age he memorized the Koran and made his first pilgrimage to Mecca. He preached an extreme fundamentalist, intolerant version of Islam earning him followers and enemies:

. . .[H]e wanted to return to the earliest teachings of Islam and eject all later medieval accretions. To achieve such ambitions he opposed Sufism and Shia Islam, labelling them as heretical innovations (bidah) [forbidden by God] as both opposed tyranny in faith. He went on to urge all Muslims to reject the learned exegesis developed over the centuries by the ulema (scholars) and interpret the texts for themselves, or rather under his guidance. [Emphasis added]

This naturally incensed the clergy and threatened local rulers, who believed that interfering with these popular devotions would cause social unrest.

He gained and lost political patronage, eventually allying in 1744 with Muhammad ibn Saud, the founder of the modern House of Saud. The Al-Saud family saw in this violent and reactionary school of thought a grand opportunity to claim and retain power. They entered into a pact of convenience: Ibn Abd Al-Wahhab provided Ibn Saud with the religious rationale to use extreme violence against other Muslims from the Arabian Peninsula to Mesopotamia. 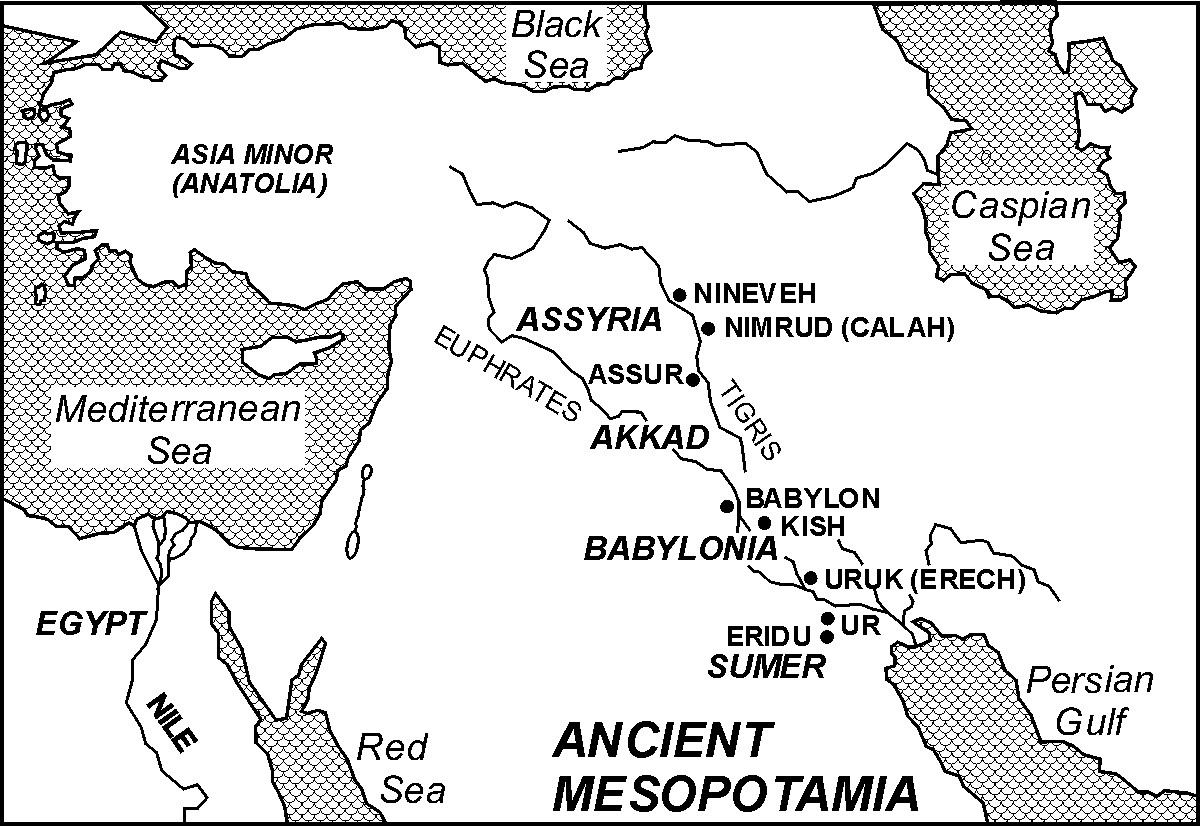 In 1801, Abd Al-Aziz Ibn Muhammad, Ibn Saud’s son and successor sacked the Shia holy cities of Karbala and Najaf (now in Iraq) and in 1803 and 1804 he captured Mecca and Medina and subjected them to Wahhabist depredations.  In 1815 the Ottoman Turks

dispatched their governor of Egypt, Muhammad Ali Pasha, to crush and destroy the Wahhabi forces.

2. THE REVIVAL OF WAHHABISM

The Saudi chieftain Ibn Saud (Abdulaziz ibn Abdul Rahman ibn Faisal ibn Turki ibn Abdullah ibn Muhammad Al Saud) expanded the domain of the Al-Saud in 1902 by recapturing their ancestral home, Riyadh. The Al-Saud were contesting for control of the Arabian Peninsula with the ruling family to the north, the Al-Rashid.  The Al-Rashid were allied with the Turks. The Al-Saud allied with British in 1915 against the Turks and Al-Saud lands became a British protectorate. Ibn Saud managed to use British support to outmaneuver and defeat the Al-Rashid in a series of wars. The 1916 Arab Revolt, led by the Sharif of Mecca, Hussein bin Ali, was a revolt against the Turks supported by the British and the French.

The Al-Saud did not play a significant role in the Arab Revolt.

By late 1921, the Al-Saud called on the tradition of Wahhabist jihad using their allies, an army called the Ikhwan, a “Brotherhood” of Bedouin fighters (the “Muslim Brotherhood,” a separate movement, emerged in Egypt in the 1920s; see here as well) and continued to consolidate Al-Saud control over the peninsula.

The Ikhwan allies–good Wahhabists that they were–understood all non-Wahhabists, Arabic, Islamic or otherwise, to be infidels. They attacked British protectorates such as Kuwait, Iraq and Transjordan. In order to maintain British support Ibn Saud called on the Ikhwan to cease their attacks, but they refused. Open war broke out in 1928 between the Al-Saud and the Ikhwan. Known as the Ikhwan Revolt, it ended in victory for the Al-Sauds in 1929.

The Kingdom of Saudi Arabia was established in 1932. It was recognised quickly by the western world. In 1938 oil was discovered along the coast of the Persian Gulf and development of the oil fields began in 1941 by the Arabian American Oil Company (Aramco).

In 1979 a grandson of Ikhwan warriors, Juhaiman Al-Utaibi seized the great mosque in Mecca in an attempt to overthrow the Al-Saud regime. The seizure lasted two weeks, the effort to overthrow the ruling family failed and Juhaiman was beheaded. This led to an increased Islamic-surveillance state and simultaneous promises of reform by the de-facto ruler, Crown Prince Fahd.

In 2002, according to Gwenn Okruhlik, the House of Saud recognized the continued need for reform of the most extreme aspects of its Wahhabist legacy:

Most significantly, Crown Prince Abdullah [King: 2005–2015], Saudi Arabia’s de facto ruler since King Fahd’s illness [King: 1982–2005]. . . apparently will respond to Islamists in a way that grants concessions to the opposition and protects the ruling family. Specifically, Abdullah has begun to address the grievances, allowing a popular clergy to voice opinions and by reining in the more ostentatious behavior of princes. . . .In summer 1999, he released the sheikhs who had been jailed. He has allowed the press a bit more leeway than before. He has publicly criticized United States policy toward Israel and Palestine. . . .

The good news is that Abdullah has the capability and the personal legitimacy to initiate such change.

But by January, 2012, Stephen Schwartz was reporting that Crown Prince Neyef [2011-2012; died in office] was an ardent adherent of Wahhabism, in contrast to the reining King Abdullah.

On December 28, [2011] however, now-Crown Prince Nayef opened a conference on “Salafism” – the cover name used for Wahhabism . . .

Nayef inaugurated the seminar. He declared that “Saudi Arabia would continue to follow the Salafist ideology,” and “denounced those who create doubts about” the doctrine.

In Saudi media coverage of Nayef’s theological summit, the customary praise for King Abdullah was missing. The aim of the convocation was clear: to reinforce the power of the Wahhabi clerics, their control of religious affairs, their influence on all other aspects of public life in Saudi Arabia, and their loyalty to Nayef.

It seems the efforts to reform have failed.

A study titled: “THE INVOLVEMENT OF SALAFISM/WAHHABISM IN THE SUPPORT AND SUPPLY OF ARMS TO REBEL GROUPS AROUND THE WORLD” for the European Parliament’s Committee on Foreign Affairs concluded in June 2013 that:

Saudi Arabia has been a major source of financing to rebel and terrorist organisations since the 1970s. These were some of the conclusions of a 2006 report issued by the U.S. Department of State titled International Narcotics Control Strategy Report – Money Laundering and Financial Crimes (U.S. Department of State, 2006). Since the invasion of Afghanistan by the Soviet Union, Saudi Arabia and Saudi-based private actors (i.e. wealthy businessmen, bankers, charitable organisations) have been providing financial and relief assistance to Muslim communities affected by natural calamities or conflicts. It has been estimated that Saudi Arabia has invested more than $10 billion to promote its Wahhabi agenda through charitable foundations. Some of the most influential charitable organisations operating in South and Southeast Asia are: the Islamic International Relief Organisation (IIRO), the Al Haramain Foundation, the Medical Emergency Relief Charity (MERC) and the World Assembly of Muslim Youth (WAMY). These organisations have provided funds to build educational and religious facilities, as well as hospitals, in countries like Afghanistan, Pakistan, Indonesia and the Philippines, just to mention some. [Emphasis added]

Zacarias Moussaoui, who pleaded guilty to conspiring to kill US citizens as part of 9/11, testified on October 21, 2014 regarding the direct involvement of Saudi clerics and royals in the funding of al-Qaeda, saying he

was the bookkeeper for Al Qaeda, but the U.S. intelligence services have been keeping this fact secret as much as they can, because what he knows about the crucial financial backers of Al Qaeda can be very damaging to the U.S. aristocracy, which is heavily oil-based and closely allied with the Saudi royal family, which created Al Qaeda in order to please the Saudi clerics, who are Wahhabist Muslims who constantly threaten the royals with exposure of their economic and sexual corruption unless the royals finance the spread of the Wahhabist sect (such as by Al Qaeda), and thereby finance the spread of those clerics’ own international influence and power.

Or, so says the former bookkeeper of Al Qaeda, who was selected by Al Qaeda’s military chief, Abu Hafs (also known as “Mohammed Atef”), to serve Osama bin Laden in that capacity: Zacarias Moussaoui. This is his testimony, in brief.

Alastaire Crooke reported in 2014 that

With the advent of the oil bonanza — as the French scholar, Giles Kepel writes, Saudi goals were to “reach out and spread Wahhabism across the Muslim world … to “Wahhabise” Islam, thereby reducing the “multitude of voices within the religion” to a “single creed” — a movement which would transcend national divisions. Billions of dollars were — and continue to be — invested in this manifestation of soft power.

but like the Ikhwan, ISIS represents a rebellion against the official, insufficiently pure and non-jihadi Wahhabism of modern Saudi Arabia:

The ISIS allusions to Abd Al-Wahhab and Juhayman [Juhaiman above] (whose dissident writings are circulated within ISIS) present a powerful provocation: they hold up a mirror to Saudi society that seems to reflect back to them an image of “purity” lost and early beliefs and certainties displaced by shows of wealth and indulgence.

This is the ISIS “bomb” hurled into Saudi society. King Abdullah — and his reforms — are popular, and perhaps he can contain a new outbreak of Ikwhani dissidence. But will that option remain a possibility after his death?

“I [Robert Lacey] think Salman felt that Abdullah sacrificed too much of the conservative base [and] one factor in his becoming more conservative is to try and mend that breach […].”

It is not all political. King Salman is known to be more pious than his late brother, and was far more likely to be in the company of clerics than the business elites Abdullah forged alliances with in his 10-year push for development in the kingdom. While Salman has overseen a crackdown on both financing and recruitment by IS in Saudi, he is close to Islamist figures and groups in the kingdom.

“King Salman [has built] on his extensive contacts with various groups in the kingdom which he had forged as governor of Riyadh since 1963, including with Islamist forces. Indeed, he and the new administration that he installed very rapidly seemed to be closer to the Saudi Islamists including to those deemed part of the Muslim Brotherhood,” said [Toby] Matthiesen.

“Wahhabi mosques all over the world are financed by Saudi Arabia.

“Many Islamists who are a threat to public safety come from these communities in Germany.”

Wahhabism is a legacy issue not only for Saudi Arabia, but also for the Mesopotamian Middle East.

Leave a Reply to no credit check loans Cancel reply